Other Names:
List of beacon-hills, from Minas Tirith westward to the border of Rohan:

A string of seven signal-fires atop prominent hills of the White Mountains in Anórien; used in crises by Gondor and Rohan to summon mutual military aid: 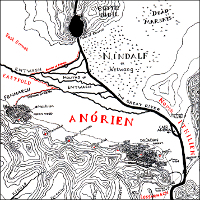 Map of Anórien, showing the beacon-hills of Gondor.
'The beacons of Gondor are alight, calling for aid. War is kindled. See, there is the fire on Amon Dîn, and flame on Eilenach; and there they go speeding west: Nardol, Erelas, Min-Rimmon, Calenhad, and the Halifirien on the borders of Rohan.'....

'It is long since the beacons of the North were lit,' [Gandalf] said; 'and in the ancient days of Gondor they were not needed, for they had the Seven Stones.'

The Return of the King, LoTR Book 5, Ch 1, Minas Tirith

Besides hosting signal-fires, the beacon-hills were also convenient waystations, maintaining fresh horses for the Steward's errand-riders:

Pippin... paid little attention to Gandalf telling him of... how the Lord of the City had beacons built on the tops of outlying hills along both borders of the great range, and maintained posts at these points where fresh horses were always in readiness to bear his errand-riders to Rohan in the North, or to Belfalas in the South.

The beacons were maintained by wardens, with rotating duty periods:

[No] tree was ever felled in the Firien Wood, except only by the Beacon-wardens whose task it was to keep open the great road and the path towards the summit of the hill. This path... wound its way up to the end of the trees, beyond which there was an ancient stairway of stone leading to the Beacon-site, a wide circle levelled by those who had made the stair. The Beacon-wardens were the only inhabitants of the Wood, save wild beasts; they housed in lodges in the trees near the summit, but they did not stay long, unless held there by foul weather, and they came and went in turns of duty.


Amon Dîn 'the silent hill' was perhaps the oldest, with the original function of a fortified outpost of Minas Tirith, from which its beacon could be seen, to keep watch over the passage into North Ithilien from Dagorlad and any attempt by enemies to cross the Anduin at or near Cair Andros. Why it was given this name is not recorded. Probably because it was distinctive, a rocky and barren hill standing out and isolated from the heavily wooded hills of the Drúadan Forest (Tawar-in-Drúedain)....

Unfinished Tales, Part 3, Ch 2, Cirion and Eorl and the Friendship of Gondor and Rohan: Notes, Note 51

Eilenach was the highest point of the Drúadan Forest. It could be seen far to the West, and its function in the days of the beacons was to transmit the warning of Amon Dîn; but it was not suitable for a large beacon-fire, there being little space on its sharp summit. Hence the name Nardol "Fire-hilltop" of the next beacon westward; it was on the end of a high ridge, originally part of the Drúadan Forest, but long deprived of trees by masons and quarriers who came up the Stonewain Valley. Nardol was manned by a guard, who also protected the quarries; it was well-stored with fuel and at need a great blaze could be lit, visible on a clear night even as far as the last beacon (Halifirien) some hundred and twenty miles to the westward.

Erelas... was a green hill without trees....

Calenhad... probably meant 'green space', with reference to the flat turf-covered 'crown' of the hill....

The Halifirien was the highest of the beacons, and like Eilenach, the next in height, appeared to stand up alone out of a great wood; for behind it there was a deep cleft, the dark Firien-dale, in the long northward spur of Ered Nimrais, of which it was the highest point.


The original three beacons were built to communicate with the Gondorians who lived in Anórien:

In the great days of Gondor no beacon was built on the Hill [Halifirien] while the palantíri still maintained communication between Osgiliath and the three towers of the realm 1 without need of messages or signals. In later days little aid could be expected from the North as the people of Calenardhon declined, nor was armed force sent thither as Minas Tirith became more and more hard put to it to hold the line of the Anduin and guard its southern coast. In Anórien many people still dwelt and had the task of guarding the northern approaches, either out of Calenardhon or across the Anduin at Cair Andros. For communication with them the three oldest beacons (Amon Dîn, Eilenach, and Min-Rimmon) were built and maintained, but though the line of the Mering Stream was fortified (between the impassable marshes of its confluence with the Entwash and the bridge where the Road passed westward out of the Firien Wood) it was not permitted that any fort or beacon should be set upon Amon Anwar.

The final four beacons, including Halifirien (Amon Anwar), were built to communicate with the Rohirrim after Calenardhon was ceded to them:

[The] full beacon system, that was still operating in the War of the Ring, can have been no older than the settlement of the Rohirrim in Calenardhon some five hundred years before; for its principal function was to warn the Rohirrim that Gondor was in danger, or (more rarely) the reverse.

Unfinished Tales, Part 3, Ch 2, Cirion and Eorl and the Friendship of Gondor and Rohan: Notes, Note 34