Other Names:
leaf (in the Shire)
(sweet) galenas (in Gondor)
westmansweed (in Gondor)
Halflings' leaf
tobacco

An herb cultivated and smoked by Hobbits of the Shire and Bree; from them the habit spread to Rangers, Dwarves, and an Istar or two:

There is another... thing about Hobbits... that must be mentioned, an astonishing habit: they imbibed or inhaled, through pipes of clay or wood, the smoke of the burning leaves of a herb, which they called pipe-weed or leaf, a variety probably of Nicotiana. 1 A great deal of mystery surrounds the origin of this peculiar custom, or 'art' as the Hobbits preferred to call it.

The Fellowship of the Ring, LoTR Prologue, Concerning Pipe-weed

When Hobbits first began to smoke is not known...; for ages folk in the Shire smoked various herbs, some fouler, some sweeter. But all accounts agree that Tobold Hornblower of Longbottom in the Southfarthing first grew the true pipe-weed in his gardens in the days of Isengrim the Second, about the year 1070 of Shire-reckoning. The best home-grown still comes from that district, especially the varieties now known as Longbottom Leaf, Old Toby, and Southern Star.

How Old Toby came by the plant is not recorded.... He knew much about herbs, but he was no traveller. It is said that in his youth he went often to Bree, though he certainly never went further from the Shire than that. It is thus quite possible that he learned of this plant in Bree, where now, at any rate, it grows well on the south slopes of the hill. The Bree-hobbits claim to have been the first actual smokers of the pipe-weed.... And certainly it was from Bree that the art of smoking the genuine weed spread in the recent centuries among Dwarves and such other folk, Rangers, Wizards, or wanderers, as still passed to and fro through that ancient road-meeting. The home and centre of the art is thus to be found in the old inn of Bree, The Prancing Pony....

[Observations] that I have made on my own many journeys south have convinced me that the weed itself is not native to our parts of the world, but came northward from the lower Anduin, whither it was, I suspect, originally brought over Sea by the Men of Westernesse. 2 It grows abundantly in Gondor, and there is richer and larger than in the North, where it is never found wild, and flourishes only in warm sheltered places like Longbottom. The Men of Gondor call it sweet galenas, and esteem it only for the fragrance of its flowers. From that land it must have been carried up the Greenway during the long centuries between the coming of Elendil and our own day. But even the Dúnedain of Gondor allow us this credit: Hobbits first put it into pipes.

From Herblore of the Shire, by Meriadoc Brandybuck
The Fellowship of the Ring, LoTR Prologue, Concerning Pipe-weed

'[The] herb-master... will tell you that he did not know that the herb you desire had any virtues, but that it is called westmansweed by the vulgar, and galenas by the noble, and other names in other tongues more learned, and after adding a few half-forgotten rhymes that he does not understand, he will regretfully inform you that there is none in the House....'

The Return of the King, LoTR Book 5, Ch 8, The Houses of Healing

[Merry] produced a small leather bag full of tobacco.... 'Pippin... found two small barrels, washed up out of some cellar.... When we opened them, we found they were filled with this: as fine a pipe-weed as you could wish for, and quite unspoilt.'

Gimli took some and rubbed it in his palms and sniffed it. 'It feels good, and it smells good,' he said.

'It is good!' said Merry. 'My dear Gimli, it is Longbottom Leaf! There were the Hornblower brandmarks on the barrels, as plain as plain.'

When [Butterbur] came back he brought them enough to last them for a day or two, a wad of uncut leaf. 'Southlinch,' he said, 'and the best we have; but not the match of Southfarthing, as I've always said though I'm all for Bree in most matters, begging your pardon.'

The Return of the King, LoTR Book 6, Ch 5, Homeward Bound

Altogether 1420 in the Shire was a marvellous year....

In the Southfarthing the vines were laden, and the yield of 'leaf' was astonishing; and everywhere there was so much corn 3 that at Harvest every barn was stuffed.

The Return of the King, LoTR Book 6, Ch 9, The Grey Havens 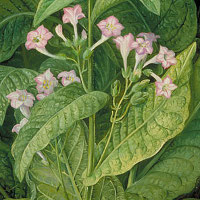 Common tobacco, Nicotiana tabacum, which Tolkien called pipe-weed.
Nicotiana tabacum, or cultivated tobacco, is a perennial herbaceous plant. It is found only in cultivation, where it is the most commonly grown of all plants in the Nicotiana genus, and its leaves are commercially grown in many countries to be processed into tobacco....

[Leaves are]... varied in size, the lower leaves are the largest up to 60 cm long, shortly stalked or unstalked, oblonged-elliptic....

Every part of the plant except the seed contains nicotine, but the concentration is related to different factors such as species, type of land, culture and weather conditions. The concentration of nicotine increases with the age of the plant. Tobacco leaves contain 2 to 8% nicotine.... The distribution of the nicotine in the mature plant is widely variable: 64% of the total nicotine exists in the leaves....

2 In a note about the family name Cotton, Tolkien remarks upon New World crops, like tobacco, that appear incongruous in Middle-earth. (For another apparent example, corn, see below 3):

[Cotton] is a common English surname and has... no connection with cotton the textile material.... Hobbits are represented as using tobacco, and this is made more or less credible by the suggestion that the plant was brought over the Sea by the Men of Westernesse (I 18); but it is not intended that cotton should be supposed to be known or used at that time....

"Guide to the Names in The Lord of the Rings" by J.R.R. Tolkien, edited by Christopher Tolkien
From A Tolkien Compass, compiled by Jared Lobdell
Chicago: Open Court Pub Co, June 1975

3 Note that by "corn", Tolkien most likely refers to wheat, rather than maize:

corn  Chiefly British Any of various cereal plants or grains, especially the principal crop cultivated in a particular region, such as wheat in England or oats in Scotland.