A white-flowered plant growing on the slopes of Amon Rûdh during the First Age.

Aeglos, 'snowthorn', is said to have been like furze (gorse), but larger, and with white flowers. Aeglos was also the name of the spear of Gil-galad. 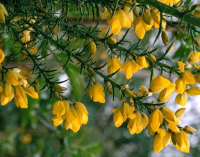 A field of furze (gorse), Ulex europaeus; the aeglos that grew on Amon Rûdh resembled these flowers, only in white.
Upon the eastern side a broken land climbed slowly up to the high ridges among knots of birch and rowan, and ancient thorn-trees rooted in rock. About the lower slopes of Amon Rûdh there grew thickets of aeglos; but its steep grey head was bare, save for the red seregon that mantled the stone....

At length they came to steeper but smoother ground. They passed under the shadows of ancient rowan-trees into aisles of long-legged aeglos: a gloom filled with a sweet scent. 1

The Return of the King, LoTR, Index


In this context, the element Aeg- appears to mean 'sharp':

From nar- 'fire'; see Sammath Naur for the complete etymology.
The Silmarillion, Appendix: Elements in Quenya and Sindarin Names


1 So also the yellow-flowered gorse bushes encountered by Frodo, Sam and Gollum in Ithilien 2 were 'gaunt and leggy below but thick above', so that they could walk upright under them, 'passing through long dry aisles', and they bore flowers that 'glimmered in the gloom and gave a faint sweet scent' (The Two Towers IV 7).

A yellow field of furze (gorse), Ulex europaeus, like that growing in Ithilien.
Soon they began to climb up on to a great hog-back of land. For the most part it was covered with a thick growth of gorse and whortleberry, and low tough thorns, though here and there clearings opened, the scars of recent fires. The gorse-bushes became more frequent as they got nearer the top; very old and tall they were, gaunt and leggy below but thick above, and already putting out yellow flowers that glimmered in the gloom and gave a faint sweet scent. So tall were the spiny thickets that the hobbits could walk upright under them, passing through long dry aisles carpeted with a deep prickly mould.

The Two Towers, LoTR Book 4, Ch 7, Journey to the Cross-roads