Meaning:
The Pourer
The Rainer

Title(s):
Lord of Waters
King of the Sea


The Vala whose domain was all the waters of Arda:

Ulmo is the Lord of Waters. He is alone. He dwells nowhere long, but moves as he will in all the deep waters about the Earth or under the Earth. He is next in might to Manwë, and before Valinor was made he was closest to him in friendship; but thereafter he went seldom to the councils of the Valar, unless great matters were in debate. For he kept all Arda in thought, and he has no need of any resting-place. Moreover he does not love to walk upon land, and will seldom clothe himself in a body after the manner of his peers. If the Children of Eru beheld him they were filled with a great dread; for the arising of the King of the Sea was terrible, as a mounting wave that strides to the land, with dark helm foam-crested and raiment of mail shimmering from silver down into shadows of green. The trumpets of Manwë are loud, but Ulmo's voice is deep as the deeps of the ocean which he only has seen. 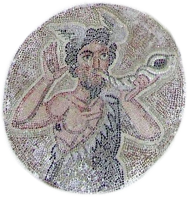 Roman mosaic of the sea-god Triton blowing a conch-shell horn similar to the Ulumúri, the horns of Ulmo.
Nonetheless Ulmo loves both Elves and Men, and never abandoned them, not even when they lay under the wrath of the Valar. At times he win come unseen to the shores of Middle-earth, or pass far inland up firths of the sea, and there make music upon his great horns, the Ulumúri, that are wrought of white shell; and those to whom that music comes hear it ever after in their hearts, and longing for the sea never leaves them again. But mostly Ulmo speaks to those who dwell in Middle-earth with voices that are heard only as the music of water. For all seas, lakes, rivers, fountains and springs are in his government; so that the Elves say that the spirit of Ulmo runs in all the veins of the world. Thus news comes to Ulmo, even in the deeps, of all the needs and griefs of Arda, which otherwise would be hidden from Manwë.

The Silmarillion, Valaquenta: Of the Valar

Now to water had that Ainu whom the Elves call Ulmo turned his thought, and of all most deeply was he instructed by Ilúvatar in music.1

But Ulmo was alone, and he abode not in Valinor, nor ever came thither unless there were need for a great council; he dwelt from the beginning of Arda in the Outer Ocean, and still he dwells there. Thence he governs the flowing of all waters, and the ebbing, the courses of all rivers and the replenishment of Springs, the distilling of all dews and rain in every land beneath the sky. In the deep places he gives thought to music great and terrible; and the echo of that music runs through all the veins of the world in sorrow and in joy; for if joyful is the fountain that rises in the sun, its springs are in the wells of sorrow unfathomed at the foundations of the Earth. The Teleri learned much of Ulmo, and for this reason their music has both sadness and enchantment. Salmar came with him to Arda, he who made the horns of Ulmo that none may ever forget who once has heard them; and Ossë and Uinen also, to whom he gave the government of the waves and the movements of the Inner Seas, and many other spirits beside. And thus it was by the power of Ulmo that even under the darkness of Melkor life coursed still through many secret lodes, and the Earth did not die; and to all who were lost in that darkness or wandered far from the light of the Valar the ear of Ulmo was ever open; nor has he ever forsaken Middle-earth, and whatsoever may since have befallen of ruin or of change he has not ceased to take thought for it, and will not until the end of days.

[There] is a chasm which sunders Valinor from Vaiya (the enfolding ocean), and it is filled with Ilmen (clean pure air), and by this way one may come from Ilmen above the earth to the lower regions, and to the Earthroots, and the caves and grottoes that are at the foundations of the lands and seas. There is Ulmo's abiding-place. Thence are derived the waters of Middle-earth. For these waters are compounded of Ilmen and Vaiya and Ambar (which is Earth), since Ulmo blends Ilmen and Vaiya and sends them up through the veins of the World to cleanse and refresh the seas and rivers, the lakes and the fountains of Earth. And running water thus possesses the memory of the deeps and the heights, and holds somewhat of the wisdom and music of Ulmo, and of the light of the luminaries of heaven.

The Shaping of Middle-earth, HoME Vol 4, Ch 5, The Ambarkanta

Then again the Valar were gathered in council, and they were divided in debate. For some, and of those Ulmo was the chief, held that the Quendi should be left free to walk as they would in Middle-earth, and with their gifts of skill to order all the lands and heal their hurts.


... Oromë did not lead the hosts of the Eldalië into the far north, but brought them to the fair lands about the River Sirion, that afterwards were named Beleriand; and from those shores whence first the Eldar looked in fear and wonder on the Sea there stretched an ocean, wide and dark and deep, between them and the Mountains of Aman.

Now Ulmo, by the counsel of the Valar, came to the shores of Middle-earth and spoke with the Eldar who waited there, gazing on the dark waves; and because of his words and the music which he made for them on his horns of shell their fear of the sea was turned rather to desire. Therefore Ulmo uprooted an island which long had stood alone amid the sea, far from either shore, since the tumults of the fall of Illuin; and with the aid of his servants he moved it, as it were a mighty ship, and anchored it in the Bay of Balar, into which Sirion poured his water. Then the Vanyar and the Noldor embarked upon that isle, and were drawn over the sea, and came at last to the long shores beneath the Mountains of Aman; and they entered Valinor and were welcomed to its bliss. But the eastern horn of the island, which was deep-grounded in the shoals off the mouths of Sirion, was broken asunder and remained behind and that, it is said, was the Isle of Balar, to which afterwards Ossë often came.

Morgoth feared and hated the House of Fingolfin, because they... had the friendship of Ulmo his foe....

The Children of Húrin, Ch 2, The Battle of Unnumbered Tears

But Ulmo coming up the river laid a deep sleep upon [Turgon and Finrod] and heavy dreams; and the trouble of the dreams remained after they awoke, but neither said aught to the other, for their memory was not clear, and each believed that Ulmo had sent a message to him alone.

And in the next year Ulmo himself appeared to [Turgon], and bade him go forth again alone into the Vale of Sirion; and Turgon went forth, and by the guidance of Ulmo he discovered the hidden vale of Tumladen in the Encircling Mountains....

[They] told also that Ulmo had come to Círdan, giving warning that great peril drew nigh to Nargothrond.

The Children of Húrin, Ch 11, The Fall of Nargothrond

But there came a great storm out of the west, and out of that storm Ulmo the Lord of Waters arose in majesty and spoke to Tuor as he stood beside the sea. 2

On a time Húrin and Huor went with a company of scouts, but they were ambushed by the Orcs and scattered, and the brothers were pursued to the ford of Brithiach. There they would have been taken or slain but for the power of Ulmo that was still strong in the waters of Sirion; and it is said that a mist arose from the river and hid them from their enemies, and they escaped over the Brithiach into Dimbar.

The Children of Húrin, Ch 1, The Childhood of Túrin


1 And it is said by the Eldar that in water there lives yet the echo of the Music of the Ainur more than in any substance else that is in this Earth....

2 Tuor made a song for Eärendil his son, concerning the coming of Ulmo the Lord of Waters to the shores of Nevrast aforetime; and the sea-longing woke in his heart, and in his son's also.