Eglantine Banks, later Eglantine 1 Took, is the wife of of Paladin Took II, Thain of the Shire during the Ring War, and the mother of Pearl, Pimpernel, Pervinca, and Pippin, later Thain Peregrin I. She appears only in the family tree for Took of Great Smials, but Tolkien supplied very few hints about her family of origin. 2

The Lord of the Rings, Appendix C, Family Trees

But most of [the hobbits of Bree] had natural names, such as Banks, Brockhouse, Longholes, Sandheaver, and Tunnelly, many of which were used in the Shire.

The Fellowship of the Ring, LoTR Book 1, Ch 9, At the Sign of the Prancing Pony


1 Eglantine is one of the many flower-names used by Tolkien for female hobbits: 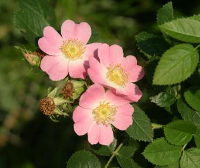 Sweet briar or eglantine, Rosa eglanteria, after which Pippin's mother was named.
It's obvious that Tolkien, like Bilbo, loved flowers, and it seems he wished to portray the spirit of Shire women through that sweet, occasionally thorny, timeless imagery....

[The] rose, which grew in abundance in Tolkien's garden, is laden with history and symbolism. Roses have been prized since at least Roman times and developed over the ensuing centuries....

There are two roses native to Britain that are easily envisioned in Middle-earth. One is the Rosa canina (briar, dog rose, wild rose)....

The other is the sweet briar, Rosa eglanteria. Like the Rosa canina, it can climb up trellises and through hedges. It has a decidedly "Tookish" nature, like the family famous for its adventurousness (the usually complacent Bilbo was spurred on by his Tookish side). One of the most treasured wild plants in England, it is loved for its apple-like scent, predominant in its leaves; due to its aroma and piercing thorns, the sweet briar represents pleasure and pain. Eglantine Took, Pippin's mother, is not the only namesake of this flower; readers of Chaucer will recognize one of his most controversial characters, Eglantine the Prioress....

Despite its delicate beauty and reputation for touchiness, the rose is remarkably hardy. Many will thrive with little or no care, and an unwanted plant can be very difficult to retire; once firmly rooted, it will persevere. While there are countless roses, they escape commonality and are treasured....

The Plants of Middle-earth: Botany and Sub-creation, by Dinah Hazell, Ch 1, Hobbit Names

2 From an earlier draft, it appears that Tolkien thought of the Banks as a family of rustics, with branches in both the Shire and Bree. It is even somewhat possible that Tolkien's original intent (later discarded) was that Paladin Took met Eglantine Banks in Bree:

[In Bree,] there were also some (to hobbits) natural names like Banks, Longholes, Brockhouse, Sandheaver, and Tunnelly, which were not unknown among the more rustic inhabitants of the Shire.

[Butterbur] went on.... 'We don't see so many Shire-folk in these days. Time was when the Tooks, now, often came along to have a crack with me or my old dad. Rare good people were the Tooks. They say they had Bree blood in 'em, and were not quite like other Shire-folk, but I don't know the rights of it.'

Note that by the time The Lord of the Rings was published, it was the Brandybucks, rather than the Tooks, who had in the past often travelled to Bree and reportedly had Bree-blood.