An event in Frodo's Departure from the Shire; see that entry for an overview: 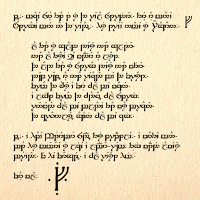 Gandalf's letter of instructions to Frodo, written in Westron (as English) with Sindarin-style Tengwar (Elvish script).
'Well?' said Strider. 'When are you going to open that letter?' Frodo looked carefully at the seal before he broke it. It seemed certainly to be Gandalf's. Inside, written in the wizard's strong but graceful script, was the following message:

Bad news has reached me here. I must go off at once. You had better leave Bag End soon, and get out of the Shire before the end of July at latest. I will return as soon as I can; and I will follow you, if I find that you are gone. Leave a message for me here, if you pass through Bree. You can trust the landlord (Butterbur). You may meet a friend of mine on the Road: a Man, lean, dark, tall, by some called Strider. He knows our business and will help you. Make for Rivendell. There I hope we may meet again. If I do not come, Elrond will advise you.

PS. Do NOT use It again, not for any reason whatever! Do not travel by night!

PPS. Make sure that it is the real Strider. There are many strange men on the roads. His true name is Aragorn.

All that is gold does not glitter,
Not all those who wander are lost;
The old that is strong does not wither,
Deep roots are not reached by the frost.
From the ashes a fire shall be woken,
A light from the shadows shall spring;
Renewed shall be blade that was broken,
The crownless again shall be king.

PPPS. I hope Butterbur sends this promptly. A worthy man, but his memory is like a lumber-room: thing wanted always buried. If he forgets, I shall roast him.

Frodo read the letter to himself, and then passed it to Pippin and Sam. 'Really old Butterbur has made a mess of things!' he said. 'He deserves roasting. If I had got this at once, we might all have been safe in Rivendell by now.'....

Frodo turned and looked at [Strider] thoughtfully.... 'Why didn't you tell me that you were Gandalf's friend at once?' he asked. 'It would have saved time.'

'Would it? Would any of you have believed me till now?' said Strider.... 'For all I knew I had to persuade you to trust me without proofs, if I was to help you. In any case, I did not intend to tell you all about myself at once. I had to study you first.... The Enemy has set traps for me before now. As soon as I had made up my mind, I was ready to tell you whatever you asked. But I must admit,' he added with a queer laugh, 'that I hoped you would take to me for my own sake. A hunted man sometimes wearies of distrust and longs for friendship.'....

Sam... still eyed Strider dubiously. 'How do we know you are the Strider that Gandalf speaks about?' he demanded. 'You never mentioned Gandalf, till this letter came out. You might be a play-acting spy..., trying to get us to go with you. You might have done in the real Strider and took his clothes. What have you to say to that?'

'That you are a stout fellow,' answered Strider; 'but I am afraid my only answer to you, Sam Gamgee, is this. If I had killed the real Strider, I could kill you. And I should have killed you already without so much talk. If I was after the Ring, I could have it — NOW!'

He stood up, and seemed suddenly to grow taller. In his eyes gleamed a light, keen and commanding. Throwing back his cloak, he laid his hand on the hilt of a sword that had hung concealed by his side.... Sam sat wide-mouthed staring at him dumbly.

'But I am the real Strider, fortunately,' he said, looking down at them with his face softened by a sudden smile. 'I am Aragorn son of Arathorn; and if by life or death I can save you, I will.'....

At last Frodo spoke with hesitation. 'I believed that you were a friend before the letter came,' he said, 'or at least I wished to. You have frightened me several times tonight, but never in the way that servants of the Enemy would, or so I imagine. I think one of his spies would — well, seem fairer and feel fouler, if you understand.'

'I see,' laughed Strider. 'I look foul and feel fair. Is that it? All that is gold does not glitter, not all those who wander are lost.'

'Did the verses apply to you then?' asked Frodo. 'I could not make out what they were about. But how did you know that they were in Gandalf's letter, if you have never seen it?'

'I did not know,' he answered. 'But I am Aragorn, and those verses go with that name.' He drew out his sword, and they saw that the blade was indeed broken a foot below the hilt. 'Not much use is it, Sam?' said Strider. 'But the time is near when it shall be forged anew.'

'Well,' said Strider, 'with Sam's permission we will call that settled. Strider shall be your guide.'

The Fellowship of the Ring, LoTR Book 1, Ch 10, Strider