Elrond briefs Thorin and Gandalf on their acquisitions


An event in the Quest of Erebor; see that entry for an overview:

Two [swords] caught their eyes particularly, because of their beautiful scabbards and jewelled hilts. Gandalf and Thorin each took one of these....

'These look like good blades,' said the wizard, half drawing them and looking at them curiously. 'They were not made by any troll, nor by any smith among men in these parts and days; but when we can read the runes on them, we shall know more about them.'

Elrond knew all about runes of every kind. That day he looked at the swords they had brought from the trolls' lair, and he said: 'These are not troll-make. They are... very old swords of the High Elves of the West.... They were made in Gondolin for the Goblin-wars. They must have come from a dragon's hoard or goblin plunder, for dragons and goblins destroyed that city many ages ago. This, Thorin, the runes name Orcrist, the Goblin-cleaver in the ancient tongue of Gondolin; it was a famous blade. This, Gandalf, was Glamdring, Foe-hammer that the king of Gondolin once wore. Keep them well!'

'Whence did the trolls get them, I wonder?' said Thorin looking at his sword with new interest.

'I could not say,' said Elrond, 'but one may guess that your trolls had plundered other plunderers, or come on the remnants of old robberies in some hold in the mountains of the North. I have heard that there are still forgotten treasures of old to be found in the deserted caverns of the mines of Moria, since the dwarf and goblin war.'

Thorin pondered these words. 'I will keep this sword in honour,' he said. 'May it soon cleave goblins once again!'

The Hobbit, Ch 3, A Short Rest 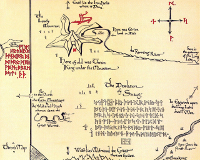 Thror's map, with the moon-letters shown in red.
'[Show] me now your map!' [Elrond] took it and gazed long at it.... The moon was shining in a broad silver crescent. He held up the map and the white light shone through it. 'What is this?' he said. 'There are moon-letters here, beside the plain runes which say "five feet high the door and three may walk abreast".'

'What are moon-letters?' asked the hobbit full of excitement....

'Moon-letters are rune-letters, but you cannot see them,' said Elrond, 'not when you look straight at them. They can only be seen when the moon shines behind them, and what is more, with the more cunning sort it must be a moon of the same shape and season as the day when they were written.... These must have been written on a midsummer's eve in a crescent moon, a long while ago.'

'What do they say?' asked Gandalf and Thorin together, a bit vexed perhaps that even Elrond should have found this out first....

'Stand by the grey stone when the thrush knocks,' read Elrond, 'and the setting sun with the last light of Durin's Day will shine upon the key-hole.'....

'Durin, Durin!' said Thorin. 'He was the father of the fathers of the eldest race of Dwarves, the Longbeards, and my first ancestor: I am his heir.'

'Then what is Durin's Day?' asked Elrond.

'The first day of the dwarves' New Year,' said Thorin....

[Said Gandalf,] 'Is there any more writing?'

'None to be seen by this moon,' said Elrond, and he gave the map back to Thorin....

The Hobbit, Ch 3, A Short Rest