Location: The chief port of Gondor, on the Great River in Lebennin above the Mouths of Anduin, at the confluence of the River Sirith; the junction of the South Road from Minas Tirith to the southern fiefdoms of Gondor and the road to the Crossings of Poros and thence to Harad. 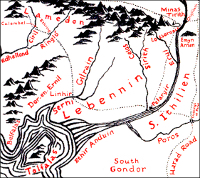 Lebennin and its environs, showing Pelargir on the Anduin at the confluence of Sirith.
Long before in the days of their power the mariners of Númenor had established a haven and strong places about the mouths of Anduin, in despite of Sauron in the Black Land that lay nigh upon the east.

[The Elf-friends] alone came now ever to the north and the land of Gil-galad, keeping their friendship with the Elves and lending them aid against Sauron; and their haven was Pelargir above the mouths of Anduin the Great. But the King's Men sailed far away to the south....

'And so we came at the bitter last to the Great River again, and we knew ere we came that it was near, for there was salt in the air. The mouths of Anduin were indeed still far away south and west of us, but Anduin is even at Pelargir so great and wide that almost it seems a slow-flowing sea, and countless birds are on its shores.'

[Ships] approaching Anduin and making for Pelargir went by the eastern side of Tol Falas and took the sea-way passage made by the Númenóreans in the midst of the Delta of Anduin.

Swiftly then [Legolas] told of... the dark tryst at Erech, and the great ride thence, ninety leagues 1 and three, 2 to Pelargir on Anduin. 'Four days and nights, and on into a fifth, we rode from the Black Stone,' he said.

'"It is forty leagues and two from Pelargir to the landings at the Harlond," [Aragorn] said.'


circa 1800  Númenóreans begin to establish dominions in Middle-earth:

Thus it came to pass in that time that the Númenóreans first made great settlements upon the west shores of the ancient lands.... Great harbours and strong towers they made, and there many of them took up their abode....

2350  Pelargir constructed by the Númenóreans:

Pelargir is built. It becomes the chief haven of the Faithful Númenóreans.

In the years of their power the Númenóreans had maintained many forts and havens upon the western coasts of Middle-earth for the help of their ships; and one of the chief of these was at Pelargir near the Mouths of Anduin. There Adûnaic was spoken, and mingled with many words of the languages of lesser men it became a Common Speech that spread thence along the coasts among all that had dealings with Westernesse.

The Lord of the Rings, Appendix F, The Languages and Peoples of the Third Age: Of Men

[The shores of Middle-earth] were much changed in the tumult of the winds and seas that followed the Downfall; for in some places the sea rode in upon the land, and in others it piled up new coasts.... [The] Bay of Belfalas was much filled at the east and south, so that Pelargir which had been only a few miles from the sea was left far inland, and Anduin carved a new path by many mouths to the Bay.

3320  Gondor founded by Isildur and Anárion:

In the later days to this haven came only the Faithful of Númenor, and many therefore of the folk of the coastlands in that region were in whole or in part akin to the Elf-friends and the people of Elendil, and they welcomed his sons.

Now the people of Elendil were not many, for only a few great ships had escaped the Downfall or survived the tumult of the Seas. They found, it is true, many dwellers upon the west shores who came of their own blood, wholly or in part, being descended from mariners and from wardens of forts and havens that had been set there in days gone by; yet all told the Dúnedain were now only a small folk in the midst of strangers. They used, therefore, the Westron speech in all their dealings with other men, and in the governing of the realms of which they had become the rulers....

The Peoples of Middle-earth, HoME Vol 12, Part 1, Ch 2, The Appendix on Languages: The Languages at the end of the Third Age

With Tarannon, the twelfth king, began the line of the Ship-kings, who built navies and extended the sway of Gondor along the coasts west and south of the Mouths of Anduin....

Eärnil I, his nephew, who succeeded him, repaired the ancient haven of Pelargir, and built a great navy.

[Owing] to the vigour of the 'Ship-kings'..., Gondor reached the height of its power.

The Peoples of Middle-earth, HoME Vol 12, Part 1, Ch 7, The Heirs of Elendil: The Southern Line of Gondor: The Anárioni

Various claimants to the crown appeared.... The most favoured especially by the fleet, and ship-folk of the southern shores, was the Captain of the Ships....

The Peoples of Middle-Earth, HoME Vol 12, Part 1, Ch 7, The Heirs of Elendil: The Southern Line of Gondor, The Anárioni

This was Castamir.... He... had the greatest following of all the rebels; for he was the Captain of Ships, and was supported by the people of the coasts and of the great havens of Pelargir and Umbar.

Castamir... was a cruel man.... [In] Minas Anor and in Ithilien... love for Castamir was further lessened when it became seen that he cared little for the land, and thought only of the fleets, and purposed to remove the king's seat to Pelargir.

Thus he had been king only ten years, when Eldacar... came with a great army out of the north.... There was a great battle in Lebennin at the Crossings of Erui...; but Castamir's sons escaped, and with others of their kin and many people of the fleets they held out long at Pelargir.

When they had gathered there all the force that they could... they sailed away, and established themselves at Umbar.... Umbar remained at war with Gondor for many lives of men, a threat to its coastlands and to all traffic on the sea.

1634  Pelargir attacked by the Corsairs of Umbar:

2980  Aragorn, as Thorongil, launches a raid upon Umbar:

At last [Thorongil] got leave of the Steward and gathered a small fleet, and he came to Umbar unlooked-for by night, and there burned a great part of the ships of the Corsairs.... But when they came back to Pelargir..., he would not return to Minas Tirith, where great honour awaited him.

13 March 3019  The battle of the ships and release of the Oathbreakers:

'There at Pelargir lay the main fleet of Umbar, fifty great ships and smaller vessels beyond count.... [Some] of the ships had put off, seeking to escape down the River...; and many of the smaller craft were ablaze. But the Haradrim... turned at bay, and they were fierce in despair; and they laughed when they looked on us, for they were a great army still.

'But Aragorn halted and cried...: "Now come! By the Black Stone I call you!" And suddenly the Shadow Host... came up like a grey tide, sweeping all away before it.... Pale swords were drawn; but... the Dead needed no longer any weapon but fear. None would withstand them.

'To every ship they came that was drawn up, and then they passed over the water to those that were anchored; and all the mariners were filled with a madness of terror and leaped overboard, save the slaves chained to the oars....

'Ere that dark day ended none of the enemy were left to resist us....

'[Aragorn] chose the greatest ship..., and he went up into it. Then he let sound a great concourse of trumpets...; and the Shadow Host withdrew to the shore.... And Aragorn spoke in a loud voice to the Dead Men, crying:

'"Hear now the words of the Heir of Isildur! Your oath is fulfilled.... Depart and be at rest!"

'And thereupon the King of the Dead stood out before the host and broke his spear and cast it down. Then he bowed low and turned away; and swiftly the whole grey host drew off and vanished like a mist....'

2 '[It] is, I reckoned, some 60 leagues as birds fly from Erech, over Tarlang's Neck into Lamedon, and so, crossing Kiril 3 and Ringló, to Linhir beside the waters of Gilrain, where there are fords that lead into Lebennin. And from Linhir it is a hundred miles... to Pelargir on Anduin.

3 This text is from one of Tolkien's early drafts; the name is an earlier version of the proper name as published in The Lord of the Rings.