Location: A tributary of the Brandywine River; arises in the Barrow-downs and runs southwest through the Old Forest to Haysend; Old Man Willow lives along its banks. 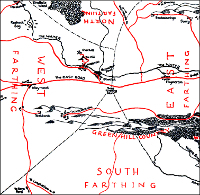 The Shire and its environs, showing the Withywindle in the Old Forest.
'That,' said Merry, pointing with his hand, 'that is the line of the Withywindle. It comes down out of the Downs and flows south-west through the midst of the Forest to join the Brandywine below Haysend. We don't want to go that way! The Withywindle valley is said to be the queerest part of the whole wood — the centre from which all the queerness comes, as it were.'

[The] High Hay... ran all the way from Brandywine Bridge, in a big loop..., to Haysend (where the Withywindle flowed out of the Forest into the Brandywine)....

The Fellowship of the Ring, LoTR Book 1, Ch 5, A Conspiracy Unmasked

A golden afternoon of late sunshine lay warm and drowsy upon the hidden land.... In the midst of it there wound lazily a dark river of brown water, bordered with ancient willows, arched over with willows, blocked with fallen willows, and flecked with thousands of faded willow-leaves. The air was thick with them, fluttering yellow from the branches; for there was a warm and gentle breeze blowing softly in the valley, and the reeds were rustling, and the willow-boughs were creaking.

'Well, now I have at least some notion of where we are!' said Merry. 'We have come almost in the opposite direction to which we intended. This is the River Withywindle!'

Everywhere the reeds and grasses were lush and tall, in places far above their heads; but... the path was easy to follow, as it turned and twisted, picking out the sounder ground among the bogs and pools. Here and there it passed over other rills, running down gullies into the Withywindle out of the higher forest-lands....

'We... learned that you were wandering. We guessed you'd come ere long down to the water: all paths lead that way, down to Withywindle. Old grey Willow-man, he's a mighty singer; and it's hard for little folk to escape his cunning mazes.'

The Fellowship of the Ring, LoTR Book 1, Ch 7, In the House of Tom Bombadil

Half in a dream [Frodo] wandered forward to the riverward side of the tree, where great winding roots grew out into the stream.... He straddled one of these, and paddled his hot feet in the cool brown water; and there he too suddenly fell asleep with his back against the tree....

[Sam] heard... the splash of something heavy falling into the water....

Frodo was in the water close to the edge, and a great tree-root seemed to be over him and holding him down, but he was not struggling. Sam... dragged him from under the root.... Almost at once he woke, and coughed and spluttered.


Withywindle. River-name in the Old Forest, intended to be in the language of the Shire. It was a winding river bordered by willows (withies). Withy- is not uncommon in English place-names, but -windle does not actually occur (Withywindle was modelled on withywind, a name of the convolvulus or bindweed 1).

Convolvulus is a genus of about 250 species of flowering plants in the bindweed family Convolvulaceae, with a cosmopolitan distribution. Common names include bindweed and morning glory, both names shared with other closely related genera....

[The] flowers [are] trumpet-shaped, mostly white or pink, but blue, violet, purple or yellow in some species....

They are mostly slender, creeping winding vines. A few are small perennials. They have simple, alternate leaves....