Other Names
Lugbúrz (by the Orcs)
the Great Tower

Location: Sauron's fortress tower in Mordor, on a long spur of the Ered Lithui (Ash Mountains) that projects southwest onto the Valley of Gorgoroth. 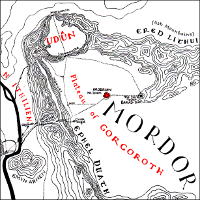 The Valley of Gorgoroth, showing the Barad-dûr on the tip of a spur of Ered Lithui.
[Against] Minas Tirith was set another fortress, greater and more strong. Thither, eastward,..: wall upon wall, battlement upon battlement, black, immeasurably strong, mountain of iron, gate of steel, tower of adamant, [Frodo] saw it: Barad-dûr, Fortress of Sauron. All hope left him....

[In] his ancient kingdom of Mordor beyond the Ephel Dúath, the Mountains of Shadow... above the valley of Gorgoroth was built his fortress vast and strong, Barad-dûr, the Dark Tower....

[The] Mountain of Fire... stood nigh to Barad-dûr; and the valley of Gorgoroth was filled with ash.

[The] world darkened and fear fell on Middle-earth, as the power of Sauron grew and the Barad-dûr rose ever taller and stronger....

The Lord of the Rings, Appendix A, Annals of the Kings and Rulers: The Tale of Aragorn and Arwen

'[The Dark Tower's] foundations... were made with the power of the Ring, and while it remains they will endure.'

The Fellowship of the Ring, LoTR Book 2, Ch 2, The Council of Elrond

Behind [Mount Doom] there hung a vast shadow, ominous as a thunder-cloud, the veils of Barad-dûr that was reared far away upon a long spur of the Ashen Mountains thrust down from the North.... [All the Dark Power's] great stronghold, gate on gate, and tower on tower, was wrapped in a brooding gloom.

The Return of the King, LoTR Book 6, Ch 2, The Land of Shadow

[Isengard] was naught, only a little copy..., of that vast fortress, armoury, prison, furnace of great power, Barad-dûr, the Dark Tower, which suffered no rival, and laughed at flattery, biding its time, secure in its pride and its immeasurable strength.

The Two Towers, LoTR Book 3, Ch 8, The Road to Isengard

'Those who pass the gates of Barad-dûr do not return.'

[Frodo] saw, rising black, blacker and darker than the vast shades amid which it stood, the cruel pinnacles and iron crown of the topmost tower of Barad-dûr. One moment only it stared out, but as from some great window immeasurably high there stabbed northward a flame of red, the flicker of a piercing Eye; and then the shadows were furled again....

There was an eye in the Dark Tower that did not sleep.

[As] Frodo... claimed [the Ring] for his own..., the Power in Barad-dûr was shaken, and the Tower trembled from its foundations to its proud and bitter crown.

A brief vision [Sam] had of swirling cloud, and in the midst of it towers and battlements, tall as hills, founded upon a mighty mountain-throne above immeasurable pits; great courts and dungeons, eyeless prisons sheer as cliffs, and gaping gates of steel and adamant: and then all passed....