Location: The easternmost region of Beleriand, between the River Gelion on the west and the Blue Mountains on the east, bounded by the rivers Ascar on the north and Adurant on the south. 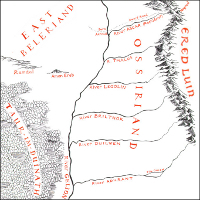 [Between] Ascar in the north and Adurant in the south, and between Gelion and Ered Luin, lay the far green country of Ossiriand, the Land of Seven Rivers.

From Ered Luin flowed the six tributaries of Gelion: Ascar (that was after named Rathlóriel), Thalos, Legolin, Brilthor, Duilwen, and Adurant, swift and turbulent streams, falling steeply from the mountains....

Gradually the hobbits became aware that [Treebeard] was chanting to them:....

I wandered in Summer in the elm-woods of Ossiriand.
Ah! the light and the music in the Summer by the Seven Rivers of Ossir!
And I thought that was best.

In Ossiriand dwelt the Green-elves, in the protection of their rivers; for after Sirion Ulmo loved Gelion above all the waters of the western world.... [The] sound of their singing could be heard even across the waters of Gelion; wherefore the Noldor named that country Lindon, the land of music, and the mountains beyond they named Ered Lindon....

Then Beren and Lúthien... passed beyond the River Gelion into Ossiriand, and dwelt there in Tol Galen the green isle, in the midst of Adurant, until all tidings of them ceased. The Eldar afterwards called that country Dor Firn-I-Guinar, the Land of the Dead that Live....

[In] the days of the Long Peace, Finrod Felagund... passed on alone towards the mountains of Ered Lindon that he saw shining afar; and taking the Dwarf-road he crossed Gelion at the ford of Sarn Athrad, and turning south over the upper streams of Ascar, he came into the north of Ossiriand.

In a valley among the foothills of the mountains, below the springs of Thalos, he saw lights in the evening, and far off he heard the sound of song.... Then Felagund... looked down into the camp, and there he beheld a strange people.

Now these were a part of the... following of Bëor the Old..., a chieftain among Men.

In the Great Battle and the tumults of the fall of Thangorodrim there were mighty convulsions in the earth, and Beleriand was broken and laid waste; and northward and westward many lands sank beneath the waters of the Great Sea. In the east, in Ossiriand, the walls of Ered Luin were broken, and a great gap was made in them towards the south, and a gulf of the sea flowed in. Into that gulf the River Lhûn fell by a new course, and it was called therefore the Gulf of Lhûn. That country had of old been named Lindon by the Noldor, and this name it bore thereafter....

Upon the shores of the Gulf of Lhûn the Elves built their havens, and named them Mithlond....


sîr  'river', from root sir- 'flow', in Ossiriand (the first element is from the stem of the numeral 'seven', Quenya otso, Sindarin odo), Sirion; also in Sirannon (the 'Gate-stream'...) and Sirith ('a flowing', as tirith 'watching' from tir).... With change of s to h in the middle of words it is present in Minhiriath 'between the rivers'...; in Nanduhirion 'vale of dim streams'..., and in Ethir Anduin, the outflow or delta of Anduin (from et-sir).