Other Names
Orod-na-Thôn 'Mountain of Pines' (by Treebeard)

the forested areas, after being burned by Morgoth's forces:
Taur-nu-Fuin 'the Forest under Nightshade'
Deldúwath 'Horror of Night-shadow'

Location: A great pine-forested plateau north of East Beleriand, between the plains of Ard-galen (Anfauglith) and Lothlann on the north, Ered Gorgoroth (Mountains of Terror) on the south, the Pass of Sirion on the west, and the Pass of Aglon on the east; realm of Angrod and Aegnor. 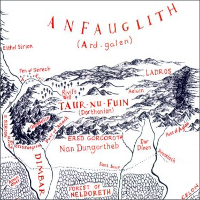 Dorthonion (Taur-nu-Fuin) and the surrounding lands.
[Into the Bay of Balar] the mighty river Sirion flowed down from the new-raised highlands northwards: Dorthonion, and the mountains about Hithlum.

South of Ard-galen the great highland named Dorthonion stretched for sixty leagues 1 from west to east; great pine forests it bore, especially on its northern and western sides. By gentle slopes from the plain it rose to a bleak and lofty land, where lay many tarns at the feet of bare tors whose heads were higher than the peaks of Ered Wethrin; but southward where it looked towards Doriath it fell suddenly in dreadful precipices....

[Ungoliant] abode long time under the shadow of the precipices in which Dorthonion fell southward. And they became known as Ered Gorgoroth, the Mountains of Terror, and none dared go thither, or pass nigh them; there life and light were strangled, and there all waters were poisoned.

Between Dorthonion and the Shadowy Mountains there was a narrow vale, whose sheer walls were clad with pines; but the vale itself was green, for the River Sirion flowed through it, hastening towards Beleriand.

East of Dorthonion the marches of Beleriand were most open to attack, and only hills of no great height guarded the vale of Gelion from the north. In that region, upon the March of Maedhros and in the lands behind, dwelt the sons of Fëanor with many people; and their riders passed often over the vast northern plain, Lothlann the wide and empty, east of Ard-galen, lest Morgoth should attempt any sortie towards East Beleriand. The chief citadel of Maedhros was upon the Hill of Himring, the Ever-cold; and that was wide-shouldered, bare of trees, and flat upon its summit, surrounded by many lesser hills. Between Himring and Dorthonion there was a pass, exceeding steep upon the west, and that was the Pass of Aglon, and was a gate unto Doriath; and a bitter wind blew ever through it from the north. But Celegorm and Curufin fortified Aglon and held it with great strength, and all the land of Himlad southward between the River Aros that rose in Dorthonion and his tributary Celon that came from Himring.

Now the forest of Dorthonion rose southward into mountainous moors; and in the east of those highlands there lay a lake, Tarn Aeluin, with wild heaths about it, and all that land was pathless and untamed, for even in the days of the Long Peace none had dwelt there.

Beren... found their camp by night at Rivil's Well [in northwest Dorthonion] above the Fen of Serech....

To the pine-trees upon the highland of Dorthonion I climbed in the Winter.
Ah! the wind and the whiteness and the black branches of Winter upon Orod-na-Thôn!
My voice went up and sang in the sky.
And now all those lands lie under the wave.

From In the willow-meads of Tasarinan
The Two Towers, LoTR Book 3, Ch 4, Treebeard

From the northern slopes of Dorthonion Angrod and Aegnor, sons of Finarfin, looked out over the fields of Ard-galen, and were the vassals of their brother Finrod, lord of Nargothrond; their people were few, for the land was barren, and the great highlands behind were deemed to be a bulwark that Morgoth would not lightly seek to cross.

... Angrod and Aegnor... dwelt in regions whence Thangorodrim could be descried, and the threat of Morgoth was present to their thought.

[In] Dorthonion the lordship of the people of Bëor and the country of Ladros was given to Boromir, son of Boron, who was the grandson of Bëor the Old.


dôr  'land' (i.e. dry land as opposed to sea) was derived from ndor; it occurs in many Sindarin names, as Doriath, Dorthonion, Eriador, Gondor, Mordor, etc. In Quenya the stem was blended and confused with a quite distinct word nórë meaning 'people'; in origin Valinórë was strictly 'the people of the Valar', but Valandor 'the land of the Valar', and similarly Númen(n)órë 'people of the West', but Númendor 'land of the West'. Quenya Endor 'Middle-earth' was from ened 'middle' and ndor; this in Sindarin became Ennor (cf. ennorath 'middle lands' in the chant A Elbereth Gilthoniel)....


1 A league is approximately three miles.