Location: A side entrance to Khazad-dûm on the western slopes of the Misty Mountains, southwest of Caradhras; built in the Second Age to facilitate trade between the Elves of Hollin and the Dwarves of Moria.

Later some of the Noldor went to Eregion, upon the west of the Misty Mountains, and near to the West-gate of Moria. This they did because they learned that mithril had been discovered in Moria. The Noldor were great craftsmen and less unfriendly to the Dwarves than the Sindar; but the friendship that grew up between the people of Durin and the Elven-smiths of Eregion was the closest that there has ever been between the two races. Celebrimbor was lord of Eregion and the greatest of their craftsmen; he was descended from Fëanor.

'There was a door south-west of Caradhras, some fifteen miles as the crow flies, and maybe twenty as the wolf runs,' [said] Gandalf grimly.'....

They reached the strip of dry land between the lake and the cliffs.... A mile southwards along the shore they came upon holly trees. Stumps and dead boughs were rotting in the shallows, the remains it seemed of old thickets, or of a hedge that had once lined the road across the drowned valley. But close under the cliff there stood, still strong and living, two tall trees, larger than any trees of holly that Frodo had ever seen or imagined. Their great roots spread from the wall to the water.... [They] towered overhead, stiff, dark, and silent, throwing deep night-shadows about their feet, standing like sentinel pillars at the end of the road....

'Here the Elven-way from Hollin ended. Holly was the token of the people of that land, and they planted it here to mark the end of their domain; for the West-door was made chiefly for their use in their traffic with the Lords of Moria. Those were happier days, when there was still close friendship at times between folk of different race, even between Dwarves and Elves.' 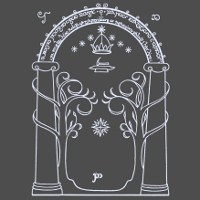 The Doors of Durin at the western entrance to Moria.
The Moon now shone upon the grey face of the rock.... [Slowly] on the surface, where the wizard's hands had passed, faint lines appeared, like slender veins of silver running in the stone.... [They] grew broader and clearer, until their design could be guessed.

At the top, as high as Gandalf could reach, was an arch of interlacing letters in an Elvish character. Below, though the threads were in places blurred or broken, the outline could be seen of an anvil and a hammer surmounted by a crown with seven stars. Beneath these again were two trees, each bearing crescent moons. More clearly than all else there shone forth in the middle of the door a single star with many rays.

'And the Star of the House of Fëanor,' said Gandalf. 'They are wrought of ithildin that mirrors only starlight and moonlight, and sleeps until it is touched by one who speaks words now long forgotten in Middle-earth.'....

'The words are in the elven-tongue of the West of Middle-earth in the Elder Days,' answered Gandalf. 'But they do not say anything of importance to us. They say only: The Doors of Durin, Lord of Moria. Speak, friend, and enter. And underneath small and faint is written: I, Narvi, made them. Celebrimbor of Hollin drew these signs.'....

'Yes,' said Gandalf, 'these doors are probably governed by words. Some dwarf-gates will open only at special times, or for particular persons; and some have locks and keys that are still needed when all necessary times and words are known. These doors have no key. In the days of Durin they were not secret. They usually stood open and doorwards sat here. But if they were shut, any who knew the opening word could speak it and pass in.'....

'If you wish to know, I will tell you that these doors open outwards. From the inside you may thrust them open with your hands. From the outside nothing will move them save the spell of command. They cannot be forced inwards.'

'It cannot be less than forty miles from West-door to East-gate of Moria in a direct line, and the road may wind much.'

The West-gate inscription illustrates a mode of 'full writing' with the vowels represented by separate letters.

The Lord of the Rings, Appendix E, Writing and Spelling: Writing: Note