Meaning: the Sickle of the Valar

Other Names:
the Wain
the Sickle
the Seven Stars
crown of seven mighty stars

Valacirca is the Quenya name for the circumpolar cluster of seven bright stars called in real life the Plough or the Big Dipper, part of the constellation Ursa Major, the Great Bear; in the middle latitudes of the Northern Hemisphere, where Middle-earth supposedly lies, the constellation is visible above the horizon throughout the year; the two stars on the side of the "cup" of the "dipper" farthest from the "handle" point to Polaris, the North Star.

Then Varda... began a great labour.... She took the silver dews from the vats of Telperion, and therewith she made new stars and brighter.... And high in the north as a challenge to Melkor she set the crown of seven mighty stars to swing, Valacirca, the Sickle of the Valar and sign of doom. 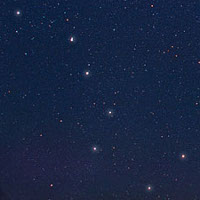 The Plough, or Big Dipper, in Ursa Major: Tolkien gave the name Valacirca to these stars.
The silver light that dripped from the boughs of Silpion she hoarded, and thence she made the stars.... The unlit skies she strewed with these bright globes of silver flame, and high above the North, a challenge unto Morgoth, she set the crown of Seven mighty Stars to swing, the emblem of the Gods, and sign of Morgoth's doom. Many names have these been called; but in the old days of the North both Elves and Men called them the Burning Briar, and some the Sickle of the Gods.

The Shaping of Middle-earth, HoME Vol 4, Ch 3, The Quenta

... The stars that burn
about the North with silver fire
in frosty airs, the Burning Briar
that Men did name in days long gone,
were set behind his back, and shone
o'er land and lake and darkened hill,
forsaken fen and mountain rill.1

The shadows fell from mountains grim.
Then sprang about the darkened North
the Sickle of the Gods, and forth
each star there stared in stony night
radiant, glistering cold and white.

Beren heard [Lúthien's song], and he thought that he dreamed.... And in answer he sang a song of challenge that he had made in praise of the Seven Stars, the Sickle of the Valar that Varda hung above the North as a sign for the fall of Morgoth.

Then in his dream it seemed he sang,
and loud and fierce his chanting rang,
old songs of battle in the North,
of breathless deeds, of marching forth
to dare uncounted odds and break
great powers, and towers, and strong walls shake;
and over all the silver fire
that once Men named the Burning Briar,
the Seven Stars that Varda set
about the North, were burning yet,
a light in darkness, hope in woe,
the emblem vast of Morgoth's foe.2

The Long Lake... was so long that its northerly end... could not be seen at all. Only from the map did Bilbo know that away up there, where the stars of the Wain3 were already twinkling, the Running River came down into the lake from Dale....

Peering out, Frodo saw that the night was still clear. The Sickle4 was swinging bright above the shoulders of Bree-hill. He then closed and barred the heavy inside shutters and drew the curtains together.

The Fellowship of the Ring, LoTR Book 1, Ch 10, Strider

The Earliest Versions of the Legend

In the earliest version we see the conception already present that the stars were created in two separate acts — that a new star-making by Varda celebrated the coming of the Elves, even though here the Elves were already awakened; and that the new stars were derived from the liquid light fallen from the Moon-tree, Silpion. The passage... from The Silmarillion goes on to tell that... Varda 'high in the north as a challenge to Melkor set the crown of seven mighty stars to swing, Valacirca...'; but here this is denied, and a special origin is claimed for the Great Bear, whose stars were not of Varda's contriving but were sparks that escaped from Aulë's forge. In the little notebook..., which is full of disjointed jottings and hastily noted projects, a different form of this myth appears:

The Silver Sickle
The seven butterflies
Aulë was making a silver sickle. Melko interrupted his work telling him a lie concerning the lady Palúrien. Aulë so wroth that he broke the sickle with a blow. Seven sparks leapt up and winged into the heavens. Varda caught them and gave them a place in the heavens as a sign of Palúrien's honour. They fly now ever in the shape of a sickle round and round the pole.

There can be no doubt, I think, that this note is earlier than the present text.

The Book of Lost Tales 1, HoME Vol 1, Ch 5, The Coming of the Elves and the Making of Kôr, Commentary

Then did [Varda] descend to Valmar and to the abode of Aulë; and he was making vessels of silver for Lórien. A bason filled with the radiance of Telimpë5 was by his side, and this he used cunningly in his craft, but now Varda stood before him and said: "The Eldar have come!" and Aulë flung down his hammer saying: "Then Ilúvatar hath sent them at last," and the hammer striking some ingots of silver upon the floor did of its magic smite silver sparks to life, that flashed from his windows out into the heavens. Varda seeing this took of that radiance in the bason and mingled it with molten silver to make it more stable, and fared upon her wings of speed, and set stars about the firmament in very great profusion, so that the skies grew marvellously fair and their glory was doubled; and those stars that she then fashioned have a power of slumbers, for the silver of their bodies came of the treasury of Lórien and their radiance had lain in Telimpë long time in his garden.

The Book of Lost Tales 1, HoME Vol 1, Ch 5, The Coming of the Elves and the Making of Kôr


For further information about the real-life constellation, see the Big Dipper entry in Wikipedia. To see how it actually appears in the night sky, see Catching the Light: Astrophotography by Jerry Lodriguss.

about the North with silver flame
in frosty airs, that men did name
Timbridhil in the days long gone,
he set behind his back, and shone
that sickle of the heavenly field
that Bridhil Queen of stars did wield
o'er land and lake and darkened hill....

2  In the passage (2666-71) referring to the constellation of the Great Bear is the first suggestion of the idea that Varda set the Seven Stars in the sky as an emblem of hope against Morgoth.

The Lays of Beleriand, HoME Vol 3, Ch 3, The Lay of Leithian, Commentary on Canto IX

3  The Wain is a name for the seven main stars of the constellation Ursa Major, the Great Bear. These stars are more commonly known in England as the Plough and in America as the Big Dipper.

The Annotated Hobbit, Annotated by Douglas A. Anderson, Ch 10, A Warm Welcome, Note 3

4  The Hobbits' name for the Plough or Great Bear.

The Fellowship of the Ring, LoTR Book 1, Ch 10, Strider, Footnote

5  Telimpë The cauldron of silver light in Valinor; name varying with Silindrin.