Meaning: the glint at dusk

Other Names:
Morwinthi (HoME only)

Morwinyon is the Quenya name for the bright, reddish star called in real life Arcturus, part of the constellation Boötes, the Herdsman; Arcturus is the third brightest star in the night sky. 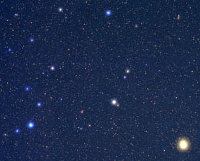 The bright red star Arcturus in the constellation Boötes (with Corona Borealis on the lower left): Tolkien named this star Morwinyon.
Then did [Varda] descend to Valmar and to the abode of Aulë; and he was making vessels of silver for Lórien. A bason filled with the radiance of Telimpë1 was by his side, and this he used cunningly in his craft, but now Varda stood before him and said: "The Eldar have come!" and Aulë flung down his hammer saying: "Then Ilúvatar hath sent them at last," and the hammer striking some ingots of silver upon the floor did of its magic smite silver sparks to life, that flashed from his windows out into the heavens. Varda seeing this took of that radiance in the bason and mingled it with molten silver to make it more stable, and fared upon her wings of speed, and set stars about the firmament in very great profusion, so that the skies grew marvellously fair and their glory was doubled; and those stars that she then fashioned have a power of slumbers, for the silver of their bodies came of the treasury of Lórien and their radiance had lain in Telimpë long time in his garden.

Some have said that the Seven Stars were set at that time by Varda to commemorate the coming of the Eldar, and that Morwinyon who blazes above the world's edge in the west was dropped by her as she fared in great haste back to Valinor. Now this is indeed the true beginning of Morwinyon and his beauty, yet the Seven Stars were not set by Varda, being indeed the sparks from Aulë's forge whose brightness in the ancient heavens urged Varda to make their rivals....2

The Book of Lost Tales 1, HoME Vol 1, Ch 5, The Coming of the Elves and the Making of Kôr

The star Morwinyon... is Arcturus.... It is nowhere explained why Morwinyon-Arcturus is mythically conceived to be always in the west.

The Book of Lost Tales 1, HoME Vol 1, Ch 5, The Coming of the Elves and the Making of Kôr, Commentary

[Other stars] there were whose vessels were like translucent lamps set quivering above the world..., and they flickered and waned for the stirring of the upper winds, yet abode where they hung and moved not; and of these some were very great and beautiful and the Gods and Elves among all their riches loved them; and thence indeed the jewel-makers catch their inspiration. Not least did they love Morwinyon of the west, whose name meaneth the glint at dusk, and of his setting in the heavens much has been told....

Morwinyon has appeared in an earlier tale..., with the story that Varda dropped it 'as she fared in great haste back to Valinor', and that it 'blazes above the world's edge in the west', in the present tale Morwinyon (which according to both the Qenya and Gnomish word-lists is Arcturus) is again strangely represented as being a luminary always of the western sky. It is said here that while some of the stars were guided by the Mánir and the Súruli 'on mazy courses', others, including Morwinyon and Nielluin, 'abode where they hung and moved not'. Is the explanation of this that in the ancient myths of the Elves there was a time when the regular apparent movement of all the heavenly bodies from East to West had not yet begun? This movement is nowhere explained mythically in my father's cosmology.

The Book of Lost Tales 1, HoME Vol 1, Ch 8, The Tale of the Sun and the Moon: Commentary


Morwinyon This name of the star Arcturus is translated in the text... as 'the glint at dusk', and QL, giving it under root MORO (see Mornië), renders it 'glint in the dark'. QL has a root GWINI with derivative word wintil 'a glint'.


For further information about the real-life star, see the Arcturus entry in Wikipedia. To see how the star actually appears in the night sky, see The Deep Photographic Guide to the Constellations.

1   Telimpë The cauldron of silver light in Valinor; name varying with Silindrin.

2   This is one of the early, discarded versions of the making of the Valacirca; see that entry for all the variations of the legend.