Other Names:
the White Tree
the Silver Tree
the Tree of Silver
the Eldest of Trees
Ninquelótë 'white blossom'

And as [the Valar] watched, upon the mound there came forth two slender shoots.... Under [Yavanna's] song the saplings grew and became fair and tail, and came to flower; and thus there awoke in the world the Two Trees of Valinor....

The one had leaves of dark green that beneath were as shining silver, and from each of his countless flowers a dew of silver light was ever falling, and the earth beneath was dappled with the shadow of his fluttering leaves. The other bore leaves of a young green...; their edges were of glittering gold.... Telperion the one was called in Valinor, and Silpion, and Ninquelótë, and many other names; but Laurelin the other was....

Telperion was the elder of the trees and came first to full stature and to bloom; and that first hour in which he shone, the white glimmer of a silver dawn, the Valar reckoned not into the tale of hours, but named it the Opening Hour, and counted from it the ages of their reign in Valinor. Therefore at the sixth hour of the First Day, and of all the joyful days thereafter, until the Darkening of Valinor, Telperion ceased his time of flower; and at the twelfth hour Laurelin her blossoming. And each day of the Valar in Aman contained twelve hours, and ended with the second mingling of the lights, in which Laurelin was waning but Telperion was waxing. But the light that was spilled from the trees endured long, ere it was taken up into the airs or sank down into the earth; and the dews of Telperion... Varda hoarded in great vats like shining lakes, that were to all the land of the Valar as wells of water and of light.

Cherry blossoms Prunus avium: Tolkien likened the blossoms of Telperion, the White Tree of Valinor, to these.
The one had leaves of dark green that beneath were as shining silver; and he bore white blossoms like unto a cherry-tree, 1 were it surpassing great and fair....

[He] bore white blossoms like the cherry, from which a dew of silver light was ever falling, so that the earth beneath was dappled with the dark dancing shadows of his leaves and the flickering white radiance of his flowers.

The Lost Road and Other Writings, HoME Vol 5, Part 2, Ch 6, Quenta Silmarillion: 2 Of Valinor and the Two Trees

Thus there awoke in the world the Two Trees of Valinor, of all growing things the fairest and most renowned, whose fate is woven with the fate of Arda. The elder of the Trees was named Telperion, and its blossoms were of shining white, and a dew of silver light was spilled from them.... From those Trees there came forth a great light, and all Valinor was filled with it. Then the bliss of the Valar was increased; for the light of the Trees was holy and of great power, so that, if aught was good or lovely or of worth, in that light its loveliness and its worth were fully revealed; and all that walked in that light were glad at heart.

[Varda] took the silver dews from the vats of Telperion, and therewith she made new stars and brighter against the coming of the Firstborn; wherefore she whose name out of the deeps of time and the labours of Eä was Tintallë, the Kindler, was called after by the Elves Elentári, Queen of the Stars.

Yet even as hope failed and [Yavanna's] song faltered, Telperion bore at last upon a leafless bough one great flower of silver, and Laurelin a single fruit of gold.

These Yavanna took; and then the Trees died.... Aulë and his people made vessels to hold them and preserve their radiance.... These vessels the Valar gave to Varda, that they might become lamps of heaven, outshining the ancient stars...; and she gave them power to traverse the lower regions of Ilmen....

Isil the Sheen the Vanyar of old named the Moon, flower of Telperion in Valinor....

Isil was first wrought and made ready, and first rose into the realm of the stars, and was the elder of the new lights, as was Telperion of the Trees.

[Out] of the very edge of the snow there sprang a sapling tree.... Already it had put forth young leaves long and shapely, dark above and silver beneath, and upon its slender crown it bore one small cluster of flowers whose white petals shone like the sunlit snow.

Then Aragorn cried:... 'Lo! here is a scion of the Eldest of Trees!'

The Return of the King, LoTR Book 6, Ch 5, The Steward and the King

The Earliest Versions of the Legend


Now in the midmost vale they digged two great pits....

[In] the other pit they cast three huge pearls that Ossë found in the Great Sea, and a small star Varda cast after them, and they covered it with foams and white mists and thereafter sprinkled lightly earth upon it, but Lórien... sat nigh and whispered swift noiseless words...; and the Gods poured upon that place rivers of the white radiance and silver light which Silindrin 2 held even to the brim....

Now was it twelve hours since Lindeloksë had first sprouted, and at that hour did a glint of silver pierce the yellow blaze, and behold the Valar saw a shoot arise in that place whereto the pools of Silindrin had been poured. It had a bark of tender white that gleamed like pearls and it grew even as swiftly as had Laurelin, and as it grew the glory of Laurelin abated and its blossom shone less, till that tree glowed only gently as in sleep: but, behold, the other waxed now to a stature even as lofty as Laurelin, and its stock was yet more shapely and more slender, and its rind like silk, but its boughs above were thicker and more tangled and its twigs denser, and they put forth masses of bluish green leaves like spearheads.

Then did the Valar stare in wonder, but Palúrien said: 'Not yet has this tree ceased its growing', and behold as she spake it blossomed, and its blossoms did not hang in clusters but were like separate flowers growing each on fine stems that swung together, and were as silver and pearls and glittering stars and burnt with a white light; and it seemed as if the tree's heart throbbed, and its radiance wavered thereto waxing and waning. Light like liquid silver distilled from its bole and dripped to earth, and it shed a very great illumination about the plain, yet was that not as wide as the light of the tree of gold, and by reason also of its great leaves and of the throb of its inward life it cast a continual flutter of shadows among the pools of its brightness, very clear and black; whereat Lórien could not contain his joy, and even Mandos smiled. But Lórien said: 'Lo! I will give this tree a name and call it Silpion', and that has ever been its name since.

The Book of Lost Tales 1, HoME Vol 1, Ch 3, The Coming of the Valar and the Building of Valinor


celeb  'silver' (Quenya telep, telpë, as in Telperion) in Celeborn, Celebrant, Celebros. Celebrimbor means 'silver-fist', from the adjective celebrin 'silver' (meaning not 'made of silver' but 'like silver, in hue or worth') and paur (Quenya quare) 'fist' often used to mean 'hand'; the Quenya form of the name was Telperinquar. Celebrindal has celebrin and tal, dal 'foot'. 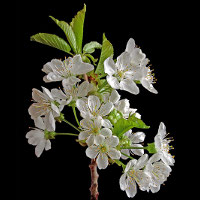 The word cherry refers to both the tree and the fleshy fruit (drupe) that contains a single stony seed. The cherry belongs to the family Rosaceae, genus Prunus, along with almonds, peaches, plums, apricots and bird cherries. The subgenus, Cerasus, is distinguished by having the flowers in small corymbs of several together (not singly, nor in racemes), and by having a smooth fruit with only a weak groove or none along one side. The subgenus is native to the temperate regions of the Northern Hemisphere, with two species in America, three in Europe, and the remainder in Asia. The word "cherry" comes from the French word "cerise," which comes in turn from the Latin words cerasum and Cerasus....

The cherries selected for eating are derived primarily from two species, the Wild Cherry (P. avium), which has given rise to the Sweet Cherry to which most cherry cultivars belong, and the Sour Cherry (P. cerasus), used mainly for cooking....

As well as the fruit, cherries also have attractive flowers, and they are commonly planted for their flower display in spring....

2 Silindrin  'Moon-cauldron', the cauldron of silver light in Valinor; also called Telimpë. Note that, in contrast to the final form of the legend, this vat of light existed before the Two Trees grew.