Kings of Arnor and Arthedain

The Kings of Arnor and Arthedain were heirs of Isildur who ruled the North Kingdom, or its subrealm of Arthedain: 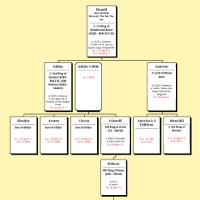 Family Tree of the Kings of Arnor and Arthedain.
In the North is the Kingdom of Arnor ruled by the descendants of Isildur....

In one of his letters, Tolkien describes the role of a reigning king of the Númenórean line, in contrast to that of a steward, such as the one that likely ruled in Arnor after Elendil and Isildur departed to fight the War of Last Alliance and before Isildur's son Valandil came of age to accede to the throne:


The last leaders of the Faithful, Elendil and his sons, escaped from the DownFall [of Númenor] with nine ships...; and they were borne on the wings of a great storm and cast up on the shores of Middle-earth. There they established in the North-west the Númenórean realms in exile, Arnor and Gondor. Elendil was the High King and dwelt in the North at Annúminas; and the rule in the South was committed to his sons, Isildur and Anárion.

Now Elendil and Gil-galad... made that League which is called the Last Alliance, and they marched east into Middle-earth gathering a great host of Elves and Men....

From Imladris they crossed the Misty Mountains... and marched down the River Anduin, and so came at last upon the host of Sauron on Dagorlad, the Battle Plain....

The host of Gil-galad and Elendil had the victory....

Thus began the Third Age of the World.... Many of the Elves and many of the Númenóreans and of Men who were their allies had perished in the Battle and the Siege; and Elendil the Tall and Gil-galad the High King were no more....

[After] he had given counsel to Meneldil, his brother's son, and had committed to him the realm of the south, [Isildur]... marched north..., for he purposed to take up his father's realm in Eriador, far from the shadow of the Black Land.

But Isildur was overwhelmed by a host of Orcs...; and they descended upon him... nigh to... the Gladden Fields.... There well nigh all his people were slain, and among them were his three elder sons, Elendur, Aratan, and Ciryon; but his wife and his youngest son, Valandil, he had left in Imladris when he went to the war... [The] Orcs... shot [Isildur] with many arrows, and that was his end....

Valandil took up his abode in Annúminas, but his folk were diminished, and of the Númenóreans and of the Men of Eriador there remained now too few to people the land or to maintain all the places that Elendil had built....

History: Kings of Arnor and Gondor

History: Chieftains of the Dúnedain

History: Kings of the Reunited Kingdom

c. circa: the date is approximate.