Other Names:
Arandur 'king's servant'
House of Húrin
House of the Stewards
Stewards of the House of Anárion
Hurinionath (HoME 12 only)

The Stewards were representatives of, and counsellors to, the reigning Kings of Gondor, except during the time of the Ruling Stewards, when they reigned over Gondor themselves, nominally until the return of a king to the throne:


In one of his letters, Tolkien describes the role of a Steward of Gondor as it relates to the role of the reigning King: 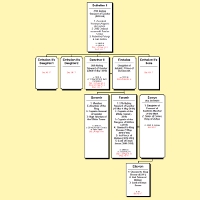 Family Tree of the Ruling Stewards of Gondor.
A Númenórean King was monarch, with the power of unquestioned decision in debate; but he governed the realm with the frame of ancient law, of which he was administrator (and interpreter) but not the maker. In all debatable matters of importance domestic, or external, however, even Denethor had a Council, and at least listened to what the Lords of the Fiefs and the Captains of the Forces had to say. Aragorn re-established the Great Council of Gondor, and in that Faramir, who remained by inheritance the Steward (or representative of the King during his absence abroad, or sickness, or between his death and the accession of his heir) would [be] the chief counsellor.

In Gondor latterly... the office of Steward rose in importance 1 and became hereditary, providing as it were a permanent "understudy" to the King, and an immediate viceroy at need....

The House of the Stewards was called the House of Húrin, for they were descendants of the Steward of King Minardil (1621-34), Húrin of Emyn Arnen, a man of high Númenórean race. After his day the kings had always chosen their stewards from among his descendants; and after the days of Pelendur the Stewardship became hereditary 2 as a kingship, from father to son or nearest kin.

[Though] the Hurinionath were not in the direct line of descent from Elendil, they were ultimately of royal origin, and had in any case kept their blood more pure than most other families in the later ages.

[The] command and use of the Stones seems mainly to have been in the hands of the Stewards, and the traditions concerning their nature and use to have been guarded 3 and transmitted in their House.

All the time of the Stewards was one of slow dwindling and waning both of the power and numbers of the Men of Gondor, and of the lore and skill of Númenor among them. Also the lifespan of those even of the purer blood steadily decreased. They were never free from war or the threat of war with the evil that dwelt in Minas Morgul and watched them. They counted it glory and success to hold that threat at bay.


Stewards of Gondor.
The House of Húrin: Pelendur 1998. He ruled for a year after the fall of Ondoher, and advised Gondor to reject Arvedui's claim to the crown.

Vorondil the Hunter 2029. Mardil Voronwë 'the Steadfast', the first of the Ruling Stewards. His successors ceased to use High-elven names.

History: Early Stewards to the Kings

It was ... Rómendacil I [492-541] who established the office of Steward (Arandur "king's servant"), but he was chosen by the King as a man of high trust and wisdom, usually advanced in years since he was not permitted to go to war or to leave the realm. He was never a member of the Royal House. [Author's note.]

Unfinished Tales, Part 3, Ch 2, Cirion and Eorl and the Friendship of Gondor and Rohan: Notes, Note 53

They were descended, father to son, from Húrin, Steward to King Minardil, who had laboured greatly for the ordering of the realm in the disastrous days of the plague, when King Telemnar died within two years of the slaying of King Minardil by the Corsairs.

[The Annals do not record the names of the earliest Stewards to the Kings of Gondor.]

[The Annals do not record the names of the successive Stewards to the Kings.]

2050 Eärnur, King of Gondor, presumed slain by the Witch-king
2050 Line of Kings of Gondor ends with Eärnur


Mardil was the first of the Ruling Stewards of Gondor. He was the Steward to Eärnur the last King, who disappeared in Minas Morgul in the year 2050.

Unfinished Tales, Part 3, Ch 2, Cirion and Eorl and the Friendship of Gondor and Rohan: Notes, Note 54

It was believed in Gondor that the faithless enemy had trapped the king, and that he had died in torment in Minas Morgul; but since there were no witnesses of his death, Mardil the Good Steward ruled Gondor in his name for many years.

Each new [Ruling] Steward indeed took office with the oath 'to hold rod and rule in the name of the king, until he shall return.' But these soon became words of ritual little heeded, for the Stewards exercised all the power of the kings. Yet many in Gondor still believed that a king would indeed return in some time to come; and some remembered the ancient line of the North, which it was rumoured still lived on in the shadows. But against such thoughts the Ruling Stewards hardened their hearts.

Nonetheless the Stewards never sat on the ancient throne; and they wore no crown, and held no sceptre. They bore a white rod only as the token of their office; and their banner was white without charge; but the royal banner had been sable, upon which was displayed a white tree in blossom beneath seven stars.

After Mardil Voronwë, who was reckoned the first of the line there followed twenty-four Ruling Stewards of Gondor, until the time of Denethor II, the twenty-sixth and last. At first they had quiet, for those were the days of the Watchful Peace, during which Sauron withdrew before the power of the White Council and the Ringwraiths remained hidden in Morgul Vale. But from the time of Denethor I, there was never full peace again, and even when Gondor had no great or open war its borders were under constant threat.

The Stewards belonged to a family of the ancient Elf-friends who used (beside the Common Speech) the Noldorin tongue [Sindarin] after the fashion of Gondor. 4 Their official names (after Mardil) were in that tongue and drawn mostly from the ancient legends of the Noldor and their dealings with the Edain.

3019 Boromir, Denethor II's heir, slain in the Orc-raid at Parth Galen
3019 Denethor II dies of suicide in the Siege of Minas Tirith

History: Later Stewards to the Kings


And after the War the days of the Ruling Stewards came to an end; for the heir of Isildur and Anárion returned and the kingship was renewed, and the standard of the White Tree flew once more from the Tower of Ecthelion.


1 [Húrin of Emyn Arnen], Steward to King Minardil,... laboured greatly for the ordering of the realm in the disastrous days of the plague, when King Telemnar died within two years of the slaying of King Minardil by the Corsairs.

2 [It] became hereditary, though if a Steward left no son, the office might pass in the female line, that is to his sister-son, or to his father's sister-son.

The choice was made according to their worth among the near kin by the Council of Gondor. But the Council had no power of choice if there was a son living.

3 [The] traditions regarding [the palantíri]... [were] preserved in the special archives of the Stewards, available beside the Ruling Steward only to his heir.

4 Since [Sindarin] had long ceased to be a 'cradle-tongue' in Gondor, but was learned in early youth (by those claiming Númenórean descent) from loremasters, and used by them as a mark of rank, it had changed very little since the Downfall of Númenor; and though the Men of Gondor altered a little some of the sounds, they could still understand the Eldar and be understood by them. In the later days, however, they saw them seldom.