Other Names:
Line of Anárion

The Kings of Gondor were heirs of Elendil's son, Anárion, who ruled the South Kingdom: 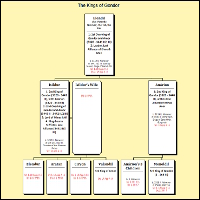 Family Tree of the Kings of Gondor.
Southward athwart the Great River Anduin are the cities and forts of the Númenórean realm of Gondor, with kings of the line of Anárion.

In one of his letters, Tolkien describes the role of a reigning king of the Númenórean line, in contrast to that of his Steward:

A Númenórean King was monarch, with the power of unquestioned decision in debate; but he governed the realm with the frame of ancient law, of which he was administrator (and interpreter) but not the maker. In all debatable matters of importance domestic, or external, however, even Denethor had a Council, and at least listened to what the Lords of the Fiefs and the Captains of the Forces had to say. Aragorn re-established the Great Council of Gondor, and in that Faramir, who remained by inheritance the Steward (or representative of the King during his absence abroad, or sickness, or between his death and the accession of his heir) would [be] the chief counsellor.


The Southern Line: Heirs of Anárion