The Kings and Queens of Númenor were Elros Tar-Minyatur and his heirs, who ruled the realm of Númenor on the island of Elenna: 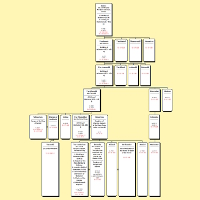 Family Tree of the Kings and Queens of Númenor.
In one of his letters, Tolkien describes the role of a reigning king of the Númenórean line and his Council:

A Númenórean King was monarch, with the power of unquestioned decision in debate; but he governed the realm with the frame of ancient law, of which he was administrator (and interpreter) but not the maker. In all debatable matters of importance domestic, or external, however, even Denethor [Steward of Gondor] had a Council, and at least listened to what the Lords of the Fiefs and the Captains of the Forces had to say.


As a reward for their sufferings in the cause against Morgoth, the Valar, the Guardians of the World, granted to the Edain a land to dwell in, removed from the dangers of Middle-earth. Most of them, therefore, set sail over Sea, and guided by the Star of Eärendil came to the great Isle of Elenna, westernmost of all Mortal lands. There they founded the realm of Númenor.

Elros was the first King of Númenor, and was afterwards known by the High-elven name Tar-Minyatur. His descendants were long-lived but mortal.

After Calmacil the Kings took the sceptre in names of the Númenórean (or Adûnaic) tongue: Ar-Adûnakhôr, Ar-Zimrathôn, Ar-Sakalthôr, Ar-Gimilzôr, Ar-Inziladûn. Inziladûn repented of the ways of the Kings and changed his name to Tar-Palantir 'The Farsighted'. His daughter should have been the fourth Queen, Tar-Míriel, but the King's nephew usurped the sceptre and became Ar-Pharazôn the Golden, last King of the Númenóreans.